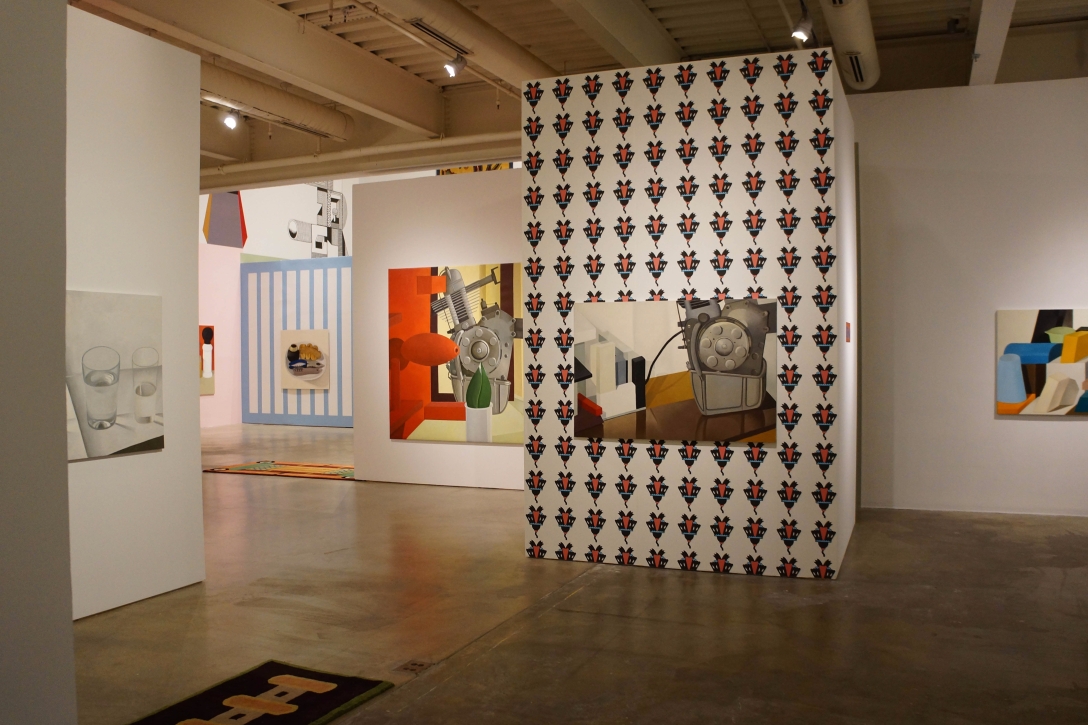 Nathalie du Pasquier’s exhibition at ICA Philadelphia shows works that defy the cold intellection of modernism and beyond.

I experienced a profound disappointment on my first trip to Madrid. In the hallowed halls of the Reina Sofia, I found Picasso’s Guernica (1937) so strangely unmoving and devoid of life that I could not help doubting the integrity of my sensory faculties. This cannot be the Guernica that I had been told to admire. The newsprint-like starkness of the painting’s monochrome suggested to me that Picasso meant this to be an urgent plea, a message of desperation, and a protest. But that intellectual suggestion fails to find its way into the realm of feeling. I had always found print reproductions of the painting to be dead and bland, but I had pinned the blame on the chalky paper of the books. Maybe now it is my historical distance from the events of Guernica that works against my capacity to feel? No, the tremors that I felt viewing the Goya canvases in the Prado rubbished that idea. In fact, it was Picasso’s choice to tear away at the picture plane that destroyed the intimacy of the painting. By flattening out the act of violence into abstract pictorial manipulations, Picasso translates the visceral brutality of the bombing of Guernica into formalist violence. Our attention is deferred to the painter’s clever sleight of hand. While we may admire his thorough transposition of destruction, raised eyebrows and knowing nods merely mask the lack of emotional energy.

This experience with Picasso sheds light on some of my previously baffling encounters with the works of some other modern and contemporary artists (Fernand Leger, Jackson Pollock, Robert Rauschenberg and David Salle comes to mind). For these painters, whom I admire greatly, the grandness of their pursuits often results in an unsatisfactory mix of awe and stubborn hardness. When the subject matter is meant to be emotionally moving, it frequently leads to disappointing results. Dana Schutz’s controversial painting, Open Casket (2016), is one prominent recent example.

So imagine my relief when I encountered Nathalie du Pasquier, BIG OBJECTS NOT ALWAYS SILENT (September 13 – December 23, 2017) at the Institute of Contemporary Art (ICA) Philadelphia. Du Pasquier’s paintings, with their Dadaist and Surrealist odes to absurd juxtapositions, and their skewed perspectival manipulations, are overtly part of the modern and postmodern lineage. Yet, they suggest that there is a way forward in which the formal attack on pictorial logic can co-exist harmoniously with instinctively intimate experiences. 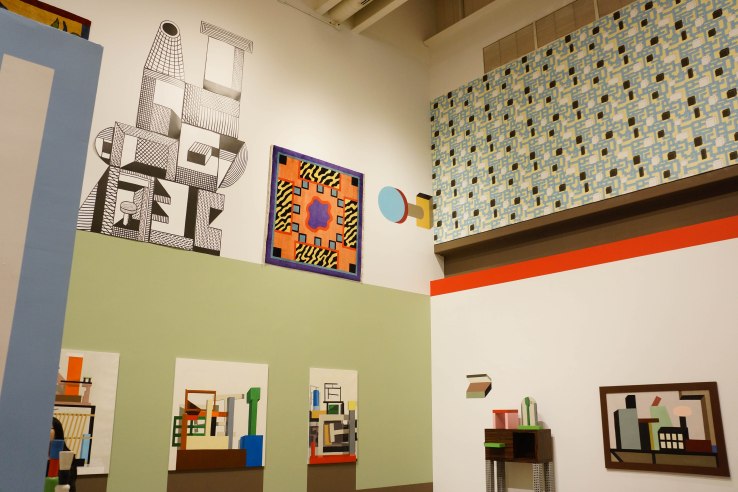 While the exhibition is primarily one of her paintings, it is also a retrospective of du Pasquier’s entire practice— including her earlier life as a designer of the Italian Memphis group, where individualism found its manifestation in bright, garish pops of color. The paintings shown are filled with the electric varietals of primary and secondary colors. Rugs with loud doodle-like designs line the floor to be stepped on. The partitions that create exhibition subspaces are painted in minty shades of pink, green and yellow. Even the high walls are fully utilized— rugs, paper assemblies, and irregularly shaped paintings hang in adjacent to bright blue-yellow wallpaper. The only exception is a small grey room (dubbed the monochrome room) in which an installation plays the audio of the poet Steve Piccolo. The way the colors are employed immediately reminds us of an everyday domestic space, a house where individual rooms are colored based on their identity— coherent microcosms suited to unique individuals and uses. Du Pasquier herself has been extensively interested in living spaces, as seen in the quirky sketches and schematics of architectural spaces shown in one of the rooms. In fact, the vocabulary of the domestic extends to the exhibition texts, where she wrote that she deliberately created the rooms to represent “families” of works and for the audience to experience the exhibition as a house of some kind.

Du Pasquier’s choices in her construction of the exhibition space make even more sense given the genre of painting she primarily works in, that of still lifes. As a genre, the quietness of still lifes has always imbued it with a variety of intimate emotions, may it be pensiveness, melancholy or ennui. But even then, when subjected to the creative whims of painters such as Picasso or Leger, its intimacy can collapse under the weight of formal showmanship. Conversely, when employed in such enigmatic manners such as that of de Chirico’s paintings, the symbolic mystery causes the collapse instead. Du Pasquier deftly side-steps these trappings in her paintings. Aided by the preemptive domestic contextualization of the exhibition space and her use of clean, bright colors, she puts the individual objects in her paintings into a warm, personable idiom. They appear approachable and immediately familiar to anyone who has lived with objects.

Take the painting Tutto sul tavolo (Everything on the table) (2002). Objects with no explicit functional relationships to each other are placed on a plain surface. Their slightly irregular placement suggests a degree of chance that teeters dangerously close to dissonance, like that of a desk after an unproductive night of work. With this calculated mess, du Pasquier inadvertently reveals her design sensitivity to the formal elements of pictorial arrangement. Ellipses rhythmically hop and echo throughout the picture from cups to bottles to cans, and the painting is held together by a spatial cohesiveness enunciated by the strategic placement of bright reds, greens, and yellows. While the objects are painted with a graphic realism, they seem to each adhere to slightly different sets of perspectival rules. For example, the round ellipse of the glass cup is seemingly incompatible with the straighter curve of the funnel. All at once, the picture’s logic feels both self-evident and untenable. But is that feeling not something which we experience daily in our lived spaces? Spaces where the actions and time of breakfast, work and drinks are all conflated into an oddly decipherable mass.

Other paintings that I found interesting are Still life on my bicycle (2005), Motom (2005) and Con la foglia di magnolia (2005-2006), where the subject matter afford du Pasquier’s design sensibility with color, shape, and line the most suitable avenues of expression. These three paintings may seem trifling and pedestrian at first glance, but they elucidate a compositional sophistication that is merely hinted at in the rest of the exhibition. However, perhaps because of such complexity, the formal excitement of these paintings takes away the potential warmth of still lifes.

Disappointingly, I found du Pasquier’s most recent Untitled paintings somewhat lacking. These works tend to regress limply into a superficial design vocabulary— eschewing the heavy responsibility of pathos in favor of a sterile formalism. The shapes lose all meaning and are reduced to abstract elements purely in service of creating a ‘resolved picture.’ Such pictures fit neatly into the post-painterly abstraction pantheon just as well as they fit above a living room couch— they have little presence of their own. Yet, despite my relative boredom with these pictures, I still found moments of joy in them. Their perversion of perspective and their highly architectural appearance reminded me of the masters of the Sienese School, especially Ambrogio Lorenzetti, with whom du Pasquier must be very familiar.

Du Pasquier’s painting is best when it grapples with the odd tensions of domestic psychology. Other than Tutto sul tavolo, paintings such as Con cesto e tazzine (2000), Non è un pranzo (2000), Cordless con arancio (2003) and Camping Gas (2003) depict the same kind of sensibility in more constricted spaces that give rise to Morandi-esque plays of spatial physicality. As such, du Pasquier is not just a sentimental still life painter, she exploits the techniques of pictorial manipulation to reach for something beyond the insular excesses of single-minded conceptual grasping— her paintings invoke emotional warmth beyond intellectual contrivances. Perhaps in our deeply unsettling times, where violence has been drained of emotional weight, du Pasquier’s works may suggest an alternative path forward. One that is not just violent and revolutionary, but instead hospitable and reconciliatory.

View all posts by D.D