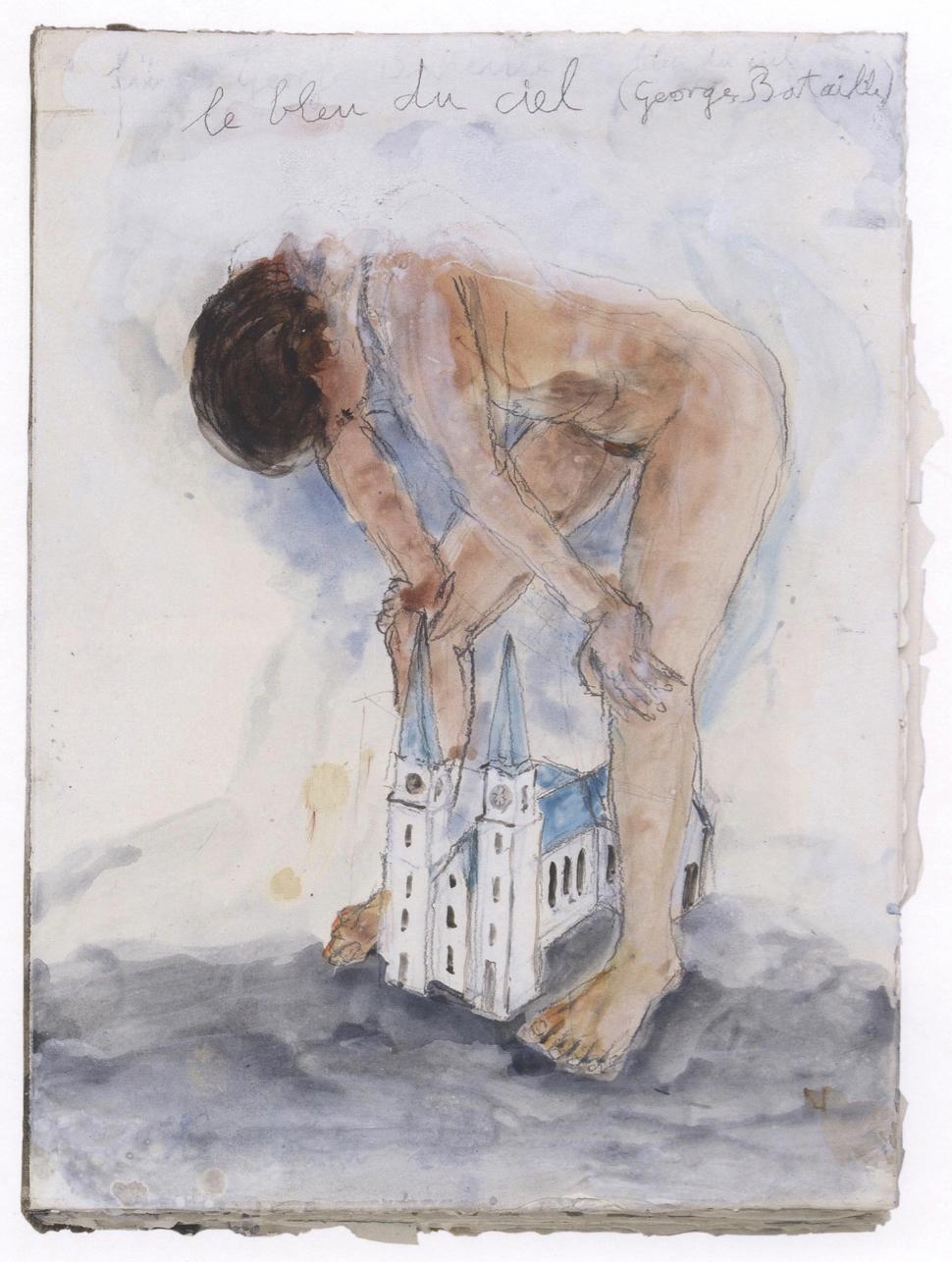 In 2013, Musée Rodin republished Les Cathédrales de France, a book written and illustrated by Rodin and originally published in 1914, with the intention to collaborate with a contemporary artist on a project in celebration of the hundredth anniversary of Rodin’s death. Kiefer, with the same fascination about cathedrals, ruins, and the female body as Rodin, took the opportunity, spent time looking at the archive of Rodin’s drawings, and visited Rodin’s studios in Meudon, France. In response to the works he saw, Kiefer created an entirely new body of work, some of which are shown in the new exhibition, Kiefer Rodin, at the Barnes Foundation, Philadelphia from November 17, 2017 to March 12, 2018.

Continuing his use of unconventional materials and his philosophical approaches of the past, life, and death in art, Kiefer created sculptures featuring plant matter, organic elements, and replicas of Rodin’s abattis (spare limbs) sealed in glass boxes. The show also contains two of Kiefer’s paintings incorporating heavy impasto and lead, as well as metal helix motifs, which assemble into strands of DNA labeled AK and AR, symbolically connecting Rodin’s practice with Kiefer’s own. Yet, what caught my attention were the drawings Kiefer created in response to Rodin’s watercolor renderings of the female body. These drawings were done with watercolors on smooth plaster-covered surfaces and are disconnected from the usual themes of his works.

Kiefer, in reference to Rodin’s comparison of the human body to architecture, especially that of cathedrals, made large-sized books and poured plaster over the cardboard pages, which then become the architectural frames that hold his watercolor drawings of female nudes. As the draughtsman, he unabashedly reveals his heterosexual fantasy about women’s bodies. Using lines and colors to mimic the patterns of marble, Kiefer created a “hard ground” for the soft, almost formless female nudes to merge in and out, and the smoothness of white plaster is reminiscent of women’s skin. The poses of the female nudes are extremely similar to the ones in Rodin’s drawings. However, compared to Rodin’s drawings, in which the lines convey an aim to sensitively depict the figures, Kiefer shows no interest in capturing the nuances of the female body. He carelessly draws the nude bodies and is concerned merely in evoking their sexuality. The features of the figures are generalized and their individualities are suppressed, which then allows the male gaze to rest on their secondary sexual characteristics—the parts that Kiefer focuses on.

In Kiefer’s large books, the new Les Cathédrales de France (2013) and Le Bleu du ciel (2013), there are watercolor drawings of the female nudes standing on top of the pointed phallic-like roofs of the cathedrals with legs wide opened. Sometimes, a vagina or two red nipples stand out against the cloudy view of a church. Kiefer seems to have copied the idea from Rodin’s Ecclesiastes (c. 1898), a piece that alludes to “Vanity of vanities; all is vanity” (Ecclesiastes 1:2) and shows a female nude lying on her back with legs raised on top of the bible. The piece suggests that the woman’s tempting body takes hold of the church. Despite his chaste analogies of female bodies to architecture, Rodin disclosed his desire for female nudes both in his works and his life when his eagerness for sex overrode his moral actions as he interacted with a bevy of mistresses. Nevertheless, Kiefer, as a contemporary male artist, adopts the same struggle and manipulates the female bodies, places them over cathedrals, or lets them flow in the air next to dark vagina-like holes as if playing with sex dolls. Considering Kiefer’s exploration of life and its metaphors in his works, like the use of the strands of DNA in A.R. A.K. (2017), an enormous painting specifically dedicated to Rodin, it is possible to associate sexuality as a part of life, and that the body is a shell for the spirit of life (as stated in the introduction of the exhibition catalogue). However, Kiefer’s depiction of female nudes forcefully puts women into a passive position, and turns them into tools that help him express his conceptual musings about life, while also encouraging gender dichotomy and inequality. By dumbly repeating the tiresome convention of erotic image-making by male artists, Kiefer deserves to be criticized more than Rodin. For a long time, men have had (and some of them still have control) over women’s actions and sexuality. Male artists, such as Rodin, Schiele, and Picasso, had a domineering access to the symbolic representation of women as sexual beings. Yet, compared to Rodin’s time when there were less awareness and critiques about gender inequality and the sexualized women in art, Kiefer’s new drawings are produced in a period where there exists female artists, female art critics, female art historians and feminist movements fighting to break such male dominant conventions and create more agency for women. What deeply frustrates and disappoints me when I see these drawings as a female viewer and artist, is that Kiefer, without a concern for how Rodin sexualized the female body in the past, reveals his reckless comfort, complicity, and confidence in the male dominance over women as he draws his female nudes. This is exacerbated by the formal staidness of the works—Kiefer’s drawings lack formal innovations. The large books with plaster surface over cardboard just seem to be Kiefer’s usual attempts at materiality, and they help emphasize the expression of female sexuality. In effect, these books are simply trite portrayals of his conspicuous male power and control over women’s bodies.

Both external reviews and catalog texts surprisingly lack gender-based critiques of Kiefer’s drawings. The exhibition catalog, Kiefer Rodin, only includes one essay, Kiefer/Rodin: Beyond Line, Beyond Desire, byHélène Marraud about the nude drawings of Kiefer and Rodin. Instead of seeing the embedded issues related to gender in the drawings, Marraud argues that Kiefer’s erotic drawings represent the final boundary of desire, which is the origin of life. Among the existing articles about Kiefer’s new body of works, only one article I found so far from Forward by Jake Romm specifically provided a critical gender reading of Kiefer’s drawings. This fact reveals that some viewers, artists, and art critics, regardless of their gender, still do not care strongly about or have enough awareness of the issues surrounding gender and sexuality in contemporary art—perhaps the celebrity of Kiefer is blinding them from his obvious issues. It is disheartening to see the long-existing problem of women taken for granted as sexual objects reoccur in works by such a renowned contemporary artist. This proves that we should not be satisfied with the current situation, and the fight for gender equality in the art world continues.

View all posts by maisieluo